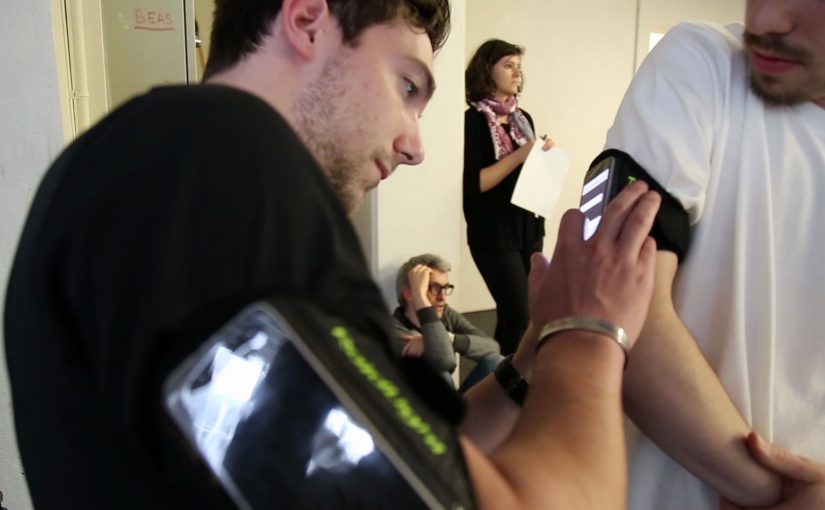 In collaboration with, Joël Chevrier (professor of physics at the Grenoble Alpes University), Anne Dubos (anthropologist and transmedia artist), Loïc Lobet (designer), and Florent Deloison (artist and developper), we proposed a two-week workshop on Smartphones and Movement at the ENSCI – Les Ateliers design school.

The workshop united a group of about twenty students who worked in small groups on the design of different projets including performances, installations, and gadgets involving smartphones in motion, as well as concepts of controlling common smartphone applications through movements.

Here are some of the projets developed during the workshop.

Physical Player is a performance for three performers wearing mobile devices on their arm. The performers move in a large space interpreting trajectories and symbols marked on the floor. Their motion induces events and changes of sound and music environment rendered through loudspeakers distributed in the space. The mobile devices analyse the performers’ movements distinguishing different states like standing still, walking, running (fast and slow), jumping, and somersault to control three different tracks of an interactive audio player.

Sorcières is a performance that integrates some of the interactive web audio applications we created at the beginning the CoSiMa project (see apps.cosima.ircam.fr/checks). During the performance, the performers invite the public to join their choreography and to produce sound with their smartphones.

The Scorpion web application transforms subtile motion and vibrations into sound. The applications has been used by the students to create a tactile sound installation.

The application has also been used in « L’Atelier tactile », a playground for little children created by Marion Voillot. In this scenario, the children search – by carefully touching and listening – for objects (i.e. mobile devices) that generate sound and light hidden in fabrics of different textures embedded into a wooden structure.

Another follow-up project of the ENSCI workshop was an application dedicated to little children created in collaboration with Marion Voillot. The application supports a scenario of storytelling where children accompany different parts of a story with different gestures that are translated into sound by smartphones they hold in their hands. The movements and sounds evoke actions and motion that occur in the story (i.e. swimming, wading trough water, pushing aside the scrub, wind over a meadow, storm) and where chosen to stimulate the children’s imagination, but also to reinforce coordination, memory, and listening.